Trellis For Tomorrow making an impact on families 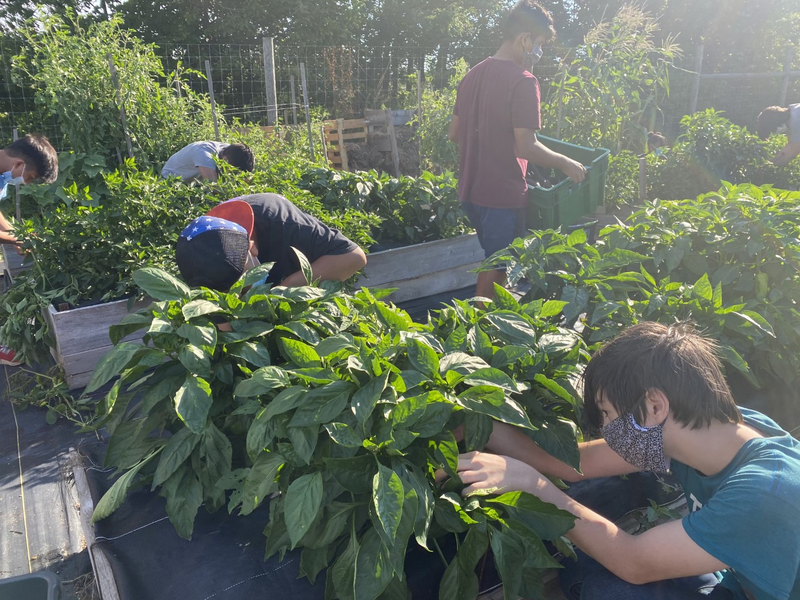 For as many pounds of fresh produce that Trellis For Tomorrow grows and donates on a yearly basis throughout Chester County – in 2019, the number totaled more than 30,000 — there seems to be an equal amount of pathways that have led its staff to the organization, in order to help solve what has become a major health crisis.

For Jennifer Anderson, who has been the executive director of Trellis since 2019, her professional career has included financial services, receiving a Master’s degree in public health, non-profit management consulting, and being the founder of an organization that worked with businesses to address how they can strategically function on a more sustainable level.

For Senior Programming Director David Ryle, it was a dovetail of experiences in the ministry, social justice and organic agriculture that led him to begin a job at the Triskeles Foundation (later named Trellis For Tomorrow) as a farm educator for at-risk youth, when he began to introduce young people to the cycle of food production that plants, grows and harvests food, gets its to food agencies around the county, and ultimately onto the tables of those who need it most.

Anderson and Ryle are not alone. They form a contingent of the seven-member Trellis For Tomorrow staff, a board of directors, volunteer participants and young people who find themselves as empowered warriors in the middle of another kind of pandemic – one that has led to the widespread shortage of food to Pennsylvanians from Philadelphia to Pittsburgh, and in all of the small communities in between.

A June study by the Pennsylvania Nutrition Education Network revealed that as of May, 2020, 1.9 million state residents struggled with food insecurity, with very limited access to food markets where healthy food like fruits and vegetables are in plentiful supply. Consequently, these individuals suffer from a lack of proper nutrition and an increased risk of cardiovascular disease, cancer, diabetes and obesity.

The rate of food insecurity in American households is on a steady climb, and COVID-19 has only added to the surge. A study done by the Brookings Institute found that food insecurity in the U.S. has “effectively doubled” due to economic disruptions caused by coronavirus.

“Addressing how we society care for our land, care for our animals and ourselves through the food that we’re growing and getting to where it needs to be could not be any more urgent. By raising these questions and giving people some on-the ground training, it solves exactly what’s needed now, in order to safeguard the future of our communities.”

Food for All & Youth Seed Enterprise

Begun in 2002, Trellis For Tomorrow primarily focuses the bulk of its energies on two food producing and distribution initiatives:

Its Food for All program is a regional effort that creates organic gardens established for and in partnership with businesses, corporations, housing communities, faith-based groups, and municipal organizations. Currently, Trellis partners with nearly 20 entities throughout Chester, Montgomery and Delaware counties, and since 2012, has planted and cultivated over 300 garden beds and donated over 200,000 pounds of food to 41 agencies in the region.

Its Youth Seed Enterprise establishes organic gardens in food deserts through the ingenuity and hands-on work of teenagers ages 13 through 18, who not only help construct the gardens, but learn valuable skills in organic gardening, operating a small business, creating a platform for youth entrepreneurship, and creatively problem-solving.

The program also enhances their understanding about the cycle of food from cultivation to distribution, and develops a strong link of meaningful community involvement.

In 2020, the number of participants in the Youth Seed Enterprise expanded to 38 young people, and so did the fruits of their labor. In communities throughout the region where food insecurity is at high levels, the students grew and donated 8,622 pounds of organic produce – representing a 246 percent increase from 2019 – that were all grown at the program’s four gardens in Montgomery County.

“It is immensely rewarding to see these kids’ faces light up when a squash seed that they planted two weeks before is now a seedling growing out of the ground, and three weeks later, they’re pruning it back and a week later, they are harvesting that squash,” Ryle said. “They begin to learn that they have the power to grow something, and the power to change their community.

“That is an unbelievable thing to see, and the ramifications of that dynamic continue to spread in the communities we’re getting to.”

The benefit of each program is that once the produce is grown, it makes it way to area food agencies and is sold at very affordable costs to those who desperately need access to nutritional food.

Whether the work of the Trellis For Tomorrow is seen through its Food For All program or in its Youth Seed Enterprise, the organization’s mission is both holistic and integrative. It provides each volunteer with an experiential education that establishes them as a conduit for change; integrates their work as part of a “real-world” solution and provides long-term exposure to the values of sustainability, self-reliance and collaboration.

Getting the right food to the right people is the equivalent to solving a complex equation, Anderson said.

“There are multiple layers to improving our food system. There is the first layer, which is getting people food. The second layer is making sure people have food that is nutritious enough to keep them healthy. The third layer is continuing to address the negative impact of our food system — environmentally and otherwise — on people’s lives.

“In these programs, the solutions come down to creating a model of distribution of growing and getting food to people and also developing a toxin-free, nutrient-focused model,” she added. “We’re addressing all of those issues at once. We are establishing gardens where people live, work and worship, and in the process are bringing in a network of people who are turning these gardens into a community asset.”

Flipping the narrative back

In a world where the growing, cultivation, distribution and availability of food has changed dramatically, Ryle said that the role of organizations like Trellis For Tomorrow is far greater than simply dropping seeds in to the ground – but to essentially return our society’s fundamental food-growing system back to the garden.

“One hundred years ago, everyone ate organic and local, and processed foods and exotic foods were reserved for the privileged,” Ryle said. “A few generations later, that entire narrative has been flipped on its head. The bulk of the food that we’re eating is coming from a great distance, and organic and local food options are now reserved for people who can afford it, and it’s out of reach for the people who desperately need it.

“As a result, people living in areas where they are unfamiliar with growing. We’re now seeing the last generation who grew up with local food. There are intrinsic abuses of the land, our animals and of ourselves that have resulted from a society that no longer asks, ‘Is this good for us?’

“We’re inserting ourselves into this dialogue,” he added. “Maybe one small non-profit in Chester County is not going to change the whole system, but we can work to establish a localized food system that gets young people to begin talking to older people. There is really magic in that. If you can change a small amount of peoples’ understandings about their relationship with food, you can change anything.”

Anderson said that much of the “big picture” crystal ball of Trellis for Tomorrow is currently wrapped up the organization’s strategic three-year plan, which further imagines a growing diagram of partnerships, access, education, inspiration, leadership and networking, all working in conjunction with each other.

Part of that long-term plan includes expanding Trellis For Tomorrow to southern Chester County, which will be realized in the establishment of garden beds in towns like Avondale, West Grove, Kennett Square and Oxford. Anderson and Ryle said that the organization will begin establishing new partnerships beginning in 2021, with a three-year plan to firmly establish Trellis for Tomorrow gardens locally.

“Some of this expansion will hinge on opportunities and potential partnerships, so we will look for communities, businesses, and faith-based groups that have the right amount of interest, the right amount of space and the right amount of youth population,” Ryle said. “When things align, that can better tip the scales to tell us that we need to take a step in those directions.”

“We have a new mission statement that talks about inspiring, resilience and compassion — to inspire individuals to build sustainability in their communities and themselves,” Anderson said. “That’s the foundation we’re building on. With 2021 soon upon us, we are going to use it as a year to define our outcomes and our measures, and doubling our efforts in future years.

“The wonderful thing about a garden is that it can be utilized for food, as well as environmental and economic social and race systems, in terms of food and agriculture. There are so many layers of a garden that benefit our communities and us as individuals. It is the gardens that we have grown where we see those who are in our programs develop not just as volunteers and students, but as agents of change.”